The Nigeria Society of Physiotherapy (NSP) is the national professional body representing physiotherapists trained around the world practicing in Nigeria. The Society has chapters in all states of the Federation and is a member of the World Confederation of Physical Therapy (WCPT). The NSP shares in the principle of WCPT that every individual is entitled to the highest possible standard of culturally appropriate healthcare provided in an atmosphere of trust and respect for dignity. 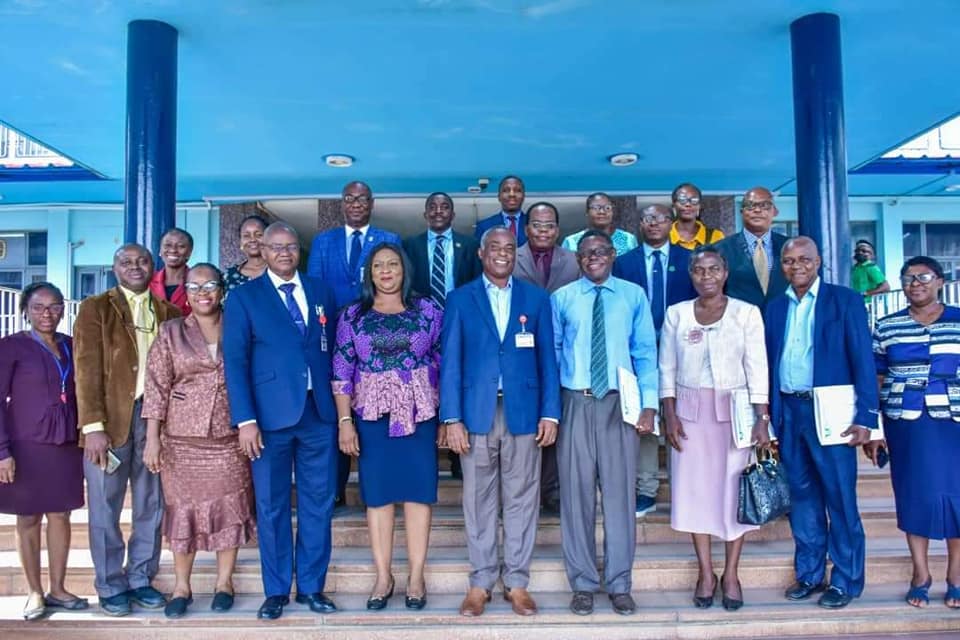 To promote highly specialized and up-to-date and excellent physiotherapy services to the populace.

To be committed to enhancing the quality of life of the clients/patients through standard and ethical practices.

The Nigeria Society of Physiotherapy (NSP), the embodiment of Physiotherapists in Nigeria, is a member of the World confederation for Physical Therapy (WCPT) and a leading member of the WCPT Africa Region (WCPTA). The NSP shares in the principles of the WCPT that every individual is entitled to the highest possible standard of culturally appropriate health care provided in an atmosphere of trust and respect for human dignity and determined by sound clinical reasoning and scientific evidence.

The Nigeria Society of Physiotherapy was inaugurated on the 29th August 1959 at a meeting held at the Physiotherapy Department of the University College Hospital, Ibadan. " A meeting was convened by Messrs T. A. Oshin and C. A. Ajao at which the following persons were present:

The objective was the desirability and need for a professional organization. A committee was formed comprising of Mrs L. E. Baker, Messrs T. A. Oshin and C.A. Ajao to prepare a draft constitution and Byelaws for ratification at the next General Meeting, which was fixed for 28th November 1959. Officers elected at the Inaugural meeting were as follows:

The first General Meeting of the Society was held on 28th November, 1959 in Lagos at 8 Club Road Ikoyi, Mrs M. E. Archer's home, a Physiotherapist in private practice. Sixteen persons were present including the founder members.

Within a short period (1961-1962) the society was recognised by the Federal Government and other Regional Governments. It was the only body that had the power to negotiate with the governments.

State chapters of the society emerged after a few years. They were all under the umbrella of the parent body, Nigeria Society of Physiotherapy (NSP).

THE NSP & THE WORLD CONFEDERATION OF PHYSICAL THERAPY

The existence of the NSP was made known in 1960 to the World Confederation for Physical Therapy with the view of becoming a member of the World Body.

On application, the, the N.S.P was granted provisional membership in 1966. It was invited in 1967 to the 5th International Congress of the WCPT which took place in Melbourne, Australia. Three NSP members: Messrs Ajao, Kehinde as well as Mrs. Aboderin were present at the memorable congress where Nigeria Society of Physiotherapy was formally admitted as full member of the World Confederation for Physical Therapy on the afternoon of Thursday 18th May, 1967. Since then, members of the of the Nigeria Society of Physiotherapy had attended the International Congress held by the World Body. Some even occupied positions in the Executive Committee. Scientific papers were presented by our members as far back as 1970 in Amsterdam; 1974 in Montreal, Canada; 1978 in Tel Aviv, Israel; 1982 in Stockholm, Sweden, 1987 in Sydney, Australia, 1991 in London, United Kingdom; 1995 in Washington D.C., United States of America; 1999 at Yokohama, Japan.

The NSP have had the privilege to welcome past President of WCPT, Mr. Eugene Micheals in our midst in 1975. He then launched the NSP's booklet on "Guidelines on the Training of Physiotherapist in Nigeria". The same was true with past Secretaries of WCPT in the persons of Miss M.J. Nelson M.B.E, 1968 and Miss E. M McKay 1979

The NSP was also opportuned to have Miss M. Hollis, M.B.E., run a course on P.N. F at the College of Medicine, Lagos University in June 1977. Miss Hollis was the Principal of the School of Physiotherapy, Bradford, England.

The long awaited recognition of the Nigeria Society of Physiotherapy as an independent registration body was achieved in 1988 when decree No. 38 on Medical Rehabilitation Therapyist Board was promulgated by the Federal Government of Nigeria. The decree has since been changed to an Act after the return to democratic rule.

Dr Mouyo Okome in his Guest Lecture at the 2012 Annual General Meeting proposed that the profession of Physiotherapy most precious “TOOL” ,“THE HANDS” be highlighted and widely published and be branded thus “OUR HANDS AID HEALING AND RECOVERY”.This has since been adopted at the OGM in Jigawa. The NSP Vision 2020, Vision, Mission and Value statements as ratified by the OGM in Jigawa 2013 becomes operational as follows: