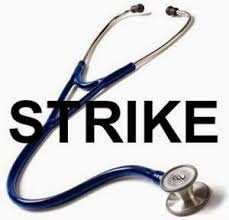 Health workers under the auspices of the National Union of Allied Health Workers (NUAHP) yesterday issued a new strike notice, which it said will commence on March 6, to give the Federal Government enough time to address their demands.

A statement from NUAHP, which was signed by O. A. Obisesan, National General-secretary of the union, said if the government continued to be adamant to the plight of health workers, the union would commence the strike on Monday, March 6. The various branches of the union have therefore been put on notice.

Part of the grouse of the union was the alleged corruption in the sector and the marginalisation of health workers. NUAHP members include pharmacists, physiotherapists, dental technologists, medical laboratory scientists, health information managers and other related professionals, except medical doctors.

The health workers also expressed dissatisfaction over the non-implementation of the agreement the union had with the Federal Ministry of Health (FMOH) since 2009. National President of NUAHP, Mr. Obinna Ogbonna, said the neglect of the health system over the years had resulted in the decay seen in administration and service.

He said the confidence in Nigeria’s health system was completely eroded, for lack of infrastructure, personnel and equipment in our hospitals, which has become death centres. “If nothing is done against the flagrant display of lawlessness, perversion of justice and the rot in the health sector, accounting for millions of preventable pains and deaths in Nigeria before February 27, the union will be left with no other option than to declare a strike action,” he said.