NATIONAL PRESS RELEASE, ON THE OCCASION OF NIGERIA SOCIETY OF PHYSIOTHERAPY AT 60. THE JOURNEY SO FAR 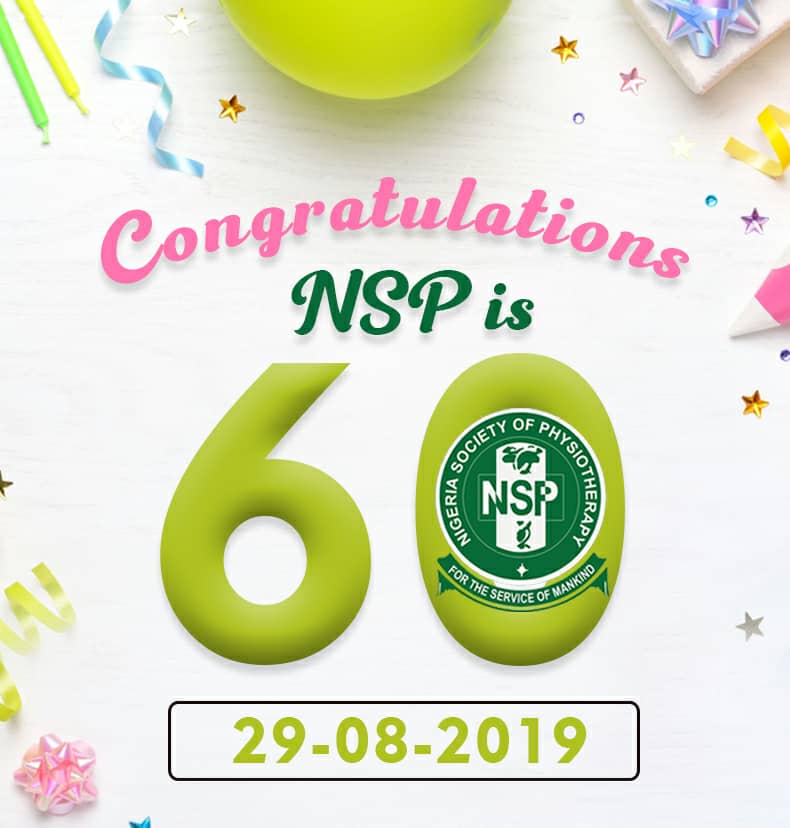 Thank you very much for your presence. Welcome to the press conference on the 60th anniversary of the Nigeria Society of Physiotherapy (NSP). Thank you very much for joining us this afternoon. My name is Dr Rufai Yusuf Ahmad, the President of the Nigeria Society of Physiotherapy. Ladies and gentlemen of the press. I thank you once again for being here and for your interest in our Profession. The NSP is the umbrella body of all Physiotherapists in Nigeria, formed on the 29th of August 1959 by the first generation of Nigerian Physiotherapists. Today, we gather here to talk about the achievements, successes and challenges of the profession over the last 60 years. The first General Meeting of the Nigeria Society of Physiotherapy was held on the 28th of November 1959. Within a short period (1961-1962) the society was recognized by the Federal Government and other Regional Governments. Out of the seven objectives initially set out at the foundation of NSP, six of the set objectives were achieved within 10 years, the last one, which was establishment of a regulatory board, could not be achieved until 1988. For seventeen years, meetings of the NSP were held at Ibadan and Lagos respectively. As membership increased in various regions of the country, meeting venues shifted from the established bases to other parts of the country. The existence of the NSP was made known in 1960 to the World Confederation for Physical Therapy with the view of becoming a member of the World Body. On application, the N.S.P was granted provisional membership in 1966. It was invited in 1967 to the 5th International Congress of the WCPT which took place in Melbourne, Australia where Nigeria Society of Physiotherapy was formally admitted as full member of the World Confederation for Physical Therapy on the afternoon of Thursday 18th May, 1967. Since then, members of the Nigeria Society of Physiotherapy had attended the International Congress held by the World Body. The NSP have had the privilege to welcome past President of WCPT, Mr. Eugene Micheals in our midst in 1975 who launched the NSP's booklet on "Guidelines on the Training of Physiotherapists in Nigeria". The same was true with past Secretaries of WCPT in the persons of Miss M.J. Nelson M.B.E, 1968 and Miss E. M McKay 1979. The NSP was also opportuned to have Miss M. Hollis, M.B.E., run a course on P.N. F at the College of Medicine, Lagos University in June 1977. Miss Hollis was the Principal of the School of Physiotherapy, Bradford, England. The NSP was able to achieve the long awaited establishment of regulatory body, Medical Rehabilitation Therapist Board for physiotherapists in Nigeria in 1988 when decree No. 38 was promulgated by the Federal Government of Nigeria. NSP was able to achieve commencement of one year internship programme for fresh graduates of physiotherapy in 1994. A new scheme of service which enables Physiotherapists to attain peak of their career as Director was achieved in 2001. With advancement in clinical practice and crave for specialization in physiotherapy practice, NSP was able to inaugurate the Postgraduate Physiotherapy college and the First set of fellows of the college in seven different faculties were conferred with the fellows of the college in 2018. The minimum training standard of physiotherapy has been upgraded to Doctor of Physiotherapy and already approved by the NUC last year, 2018.

The leading challenges facing the profession include:

1. Brain drain: Over 50% of physiotherapists produced in Nigeria have migrated to the diaspora in search of greener pastures. This has led to poor physiotherapists to populace ratio in the face of non-communicable diseases upsurge.

2. Unemployment: despite brain drain, the profession is being plaqued by unemployment. Many government hospitals, clinics, medical centres are without physiotherapists; and in instances where existing, grossly under- sourced with physiotherapists. This in turn has denied Nigerians access to physiotherapy services.

3. The cost of Physiotherapy services is majorly borne by the consumers through fee for service unlike in other climes where the fees are taken up more through health insurance scheme. It is important to state that the number of sessions physiotherapy consumers under NHIS are entitled to is also grossly inadequate.

4. The services of physiotherapists still remain under-utilized inspite of the efforts of the Nigeria Society of Physiotherapy in raising awareness.

1. There is urgent need for the government to stem down the brain drain in Physiotherapy through employment, special incentives and better practice facilities.

2. Employment of more physiotherapists into the government services will help in increasing the physiotherapists-populace ratio, and in turn help in reducing the burden of non-communicable diseases.

5. Physiotherapists should be involved in all levels of health care especially at the primary level

7. Establish Centres of Excellence in Physiotherapy specializations in Nigeria to reverse health tourism