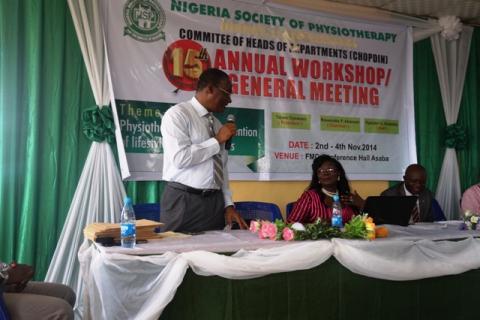 Health Professionals have been advised to embrace unity and endeavour to work as a team to promote health and well being of Nigeria’s citizenry. This advise was contained in a welcome speech delivered by the Chief Medical Director of Federal Medical Centre Asaba, Dr. Leonard Erhunmwunsee to the Committee Of Heads Of Physiotherapy Departments In Nigeria (CHOPDIN) in the 15th Annual workshop/General meeting of the committee as part of the activities to mark the 54th Nigeria society Of Physiotherapy (NSP) annual scientific conference/AGM. Speaking on the occasion, the CMD recognised the importance of Physiotherapy in healthcare team and stressed the importance of one united healthcare team without discrimination where the team as one will agitate and fight for welfare of its members and the public in general.

In his words, Dr. Erhumwunsee noted that the era of medical practice where various professionals practiced in isolation is history.That the modern medical practice entails a team approach, where each member of the team is as important as the other and where mutual respect for each member is embraced. Dr. Erhumwunsee who listened carefully to the keynote address of the NSP National President Taiwo Oyewumi, urged all the HODs of Physiotherapy Departments and all Physiotherapists across the country to join hands with the NSP National EXCOs to achieve the key things listed by the president. The CMD also thanked the NSP for choosing FMC Asaba as the venue for their Annual scientific conference and wished them a happy stay in Asaba. He promised to lend help within his capacity to promote Physiotherapy services in Asaba and Nigeria at large.

In an appreciation speech, the NSP President thanked the CMD for all his overwhelming support to the association in the past two years. He specially thanked him for making it possible for the association to be the first to utilize the new conference hall in the hospital. The NSP president solicited for more support from the CMD to the association and its members domicile in the state.