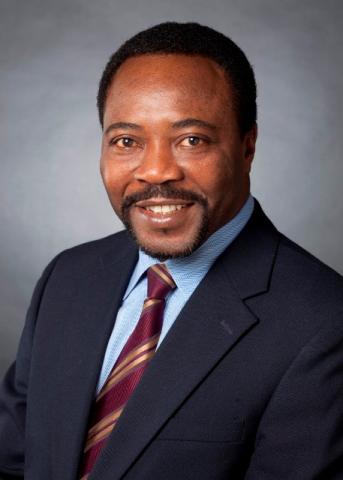 The Organizing Committee of the 54th Annual Scientific Conference and General Meeting is pleased to announce the confirmation of Dr Chukuka Enwemeka as the speaker for the 2nd Thompson Abayomi Elite Lecture Series. Dr Enwemeka is an illustrious son of the host state and he will be bringing home his wealth of experience and latest developments in the use of laser tharapy.


Profile:
Dr. Chukuka S. Enwemeka is University Distinguished Professor and Dean of the College of Health Sciences, University of Wisconsin—Milwaukee (UWM).  He joined UWM in August 2009 and has more than 20 years of academic leadership experience; including eleven years as tenured Professor and Dean at UWM and New York Institute of Technology, Old Westbury, NY, and 10 years as tenured Professor and Chairman at the University of Kansas Medical Center, Kansas City, Kan, March 1993 to February 2003. His past appointments include: Associate Professor of Orthopedics and Rehabilitation, and Associate Director of Physical Therapy, University of Miami School of Medicine, Miami, Fla. (September 1989 to February 1993), and joint appointment as Assistant Professor of Physical Therapy, Cellular and Structural Biology, and Physiology at the University of Texas Health Science Center at San Antonio, San Antonio, Tex. from 1986 to 1989.

He received his BS and MS degrees from the University of Ibadan and the University of Southern California, respectively and earned his Ph.D. from New York University (NYU) before undertaking post-doctoral research training at NYU’s Rusk Institute of Rehabilitation Medicine. He has authored more than 90 original research papers, monographs, and book chapters, and has secured millions of dollars in external grant funding.Dr. Enwemeka is a Fellow of the American College of Sports Medicine and a Fellow of the American Society for Laser Medicine and Surgery, and is listed among Who is Who in Science and Engineering, 1991. He served as an elected President of the World Association for Laser Therapy from 1998 to 2000. His wealth of academic experience includes visits to 39 countries and all but five of the 50 states in the US, either as a visiting professor, invited presenter, keynote speaker, consultant or as an invited guest of other universities.

Dr. Enwemeka is one of the foremost authorities in the use of lasers and monochromatic light for therapeutic purposes. He was the first to show that red and near infrared light, emitted by lasers and monochromatic LEDs, promote collagen polymerization and alignment. In pioneering studies, he and his team also demonstrated—for the first time—that certain wavelengths of LED blue light kill the deadly Methycillin Resistant Staphylococcus aureus (MRSA); suggesting that blue light is a viable alternative to antibiotics to which some bacteria have become resistant.