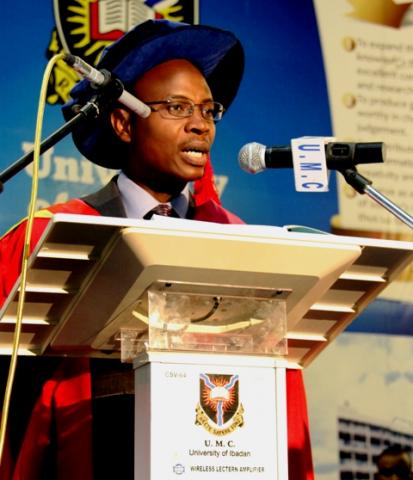 The stage had been set long before and nothing could beat the sense of accomplishment of the inaugural lecture delivered by the “learning professor” as he referred to numerous times during the proceedings. Prof TK Hamzat took centre stage on February 6, 2014 at the prestigious Trenchard hall of the University of Ibadan  to deliver his inaugural lecture as a professor of neurophysiotherapy titled “From ward to ward: The Neurophysiotherapist as a returning officer”.

The much awaited event was well attended by dignitaries notably the 87-year “young” Pa Dr T. A Oshin , colleagues and well-wishers who travelled from far and wide. He surpassed many expectations in a thought provoking yet captivating endeavour while adding bits of humour along the way as he showcased physiotherapy and indeed neurophysiotherapy to the listening audience within and outside the walls of trenchard hall. This will be the second time in the 47- year history of the university a Physiotherapist has stepped up to the podium to deliver a lecture in this series. The first was presented by the erudite scholar Professor Arinola O Sanya who is currently the Deputy Vice-Chancellor of the University in 2010 titled “Physiotherapy and Wellness: Rungs of the Ladder” which was also responsible for showcasing the profession like never before and equally received with wide acclaim. Prof Hamzat’s lecture was delivered aptly and it created the perspective of the existing day to day challenges and proffered solutions in a 7-point communiqué to summ it all up in the end. Everyone in attendance or watching  live via the university’s live stream portal will have a lot to ponder about long after leaving the room when the lecture itself was over. Indeed a celebration of one of our own.

In closing Prof Hamzat said “In the course of my educational and professional journeys, many people have served as my guides and guardians, and to them I am very grateful. A certain anon wrote: “We want a learning professor, not a learned professor, one who does not read is not better than one who cannot”. Congratulations to the learning professor and we wish Professor Hamzat many more years of excellence and successes ahead for the benefit of the profession and humanity.